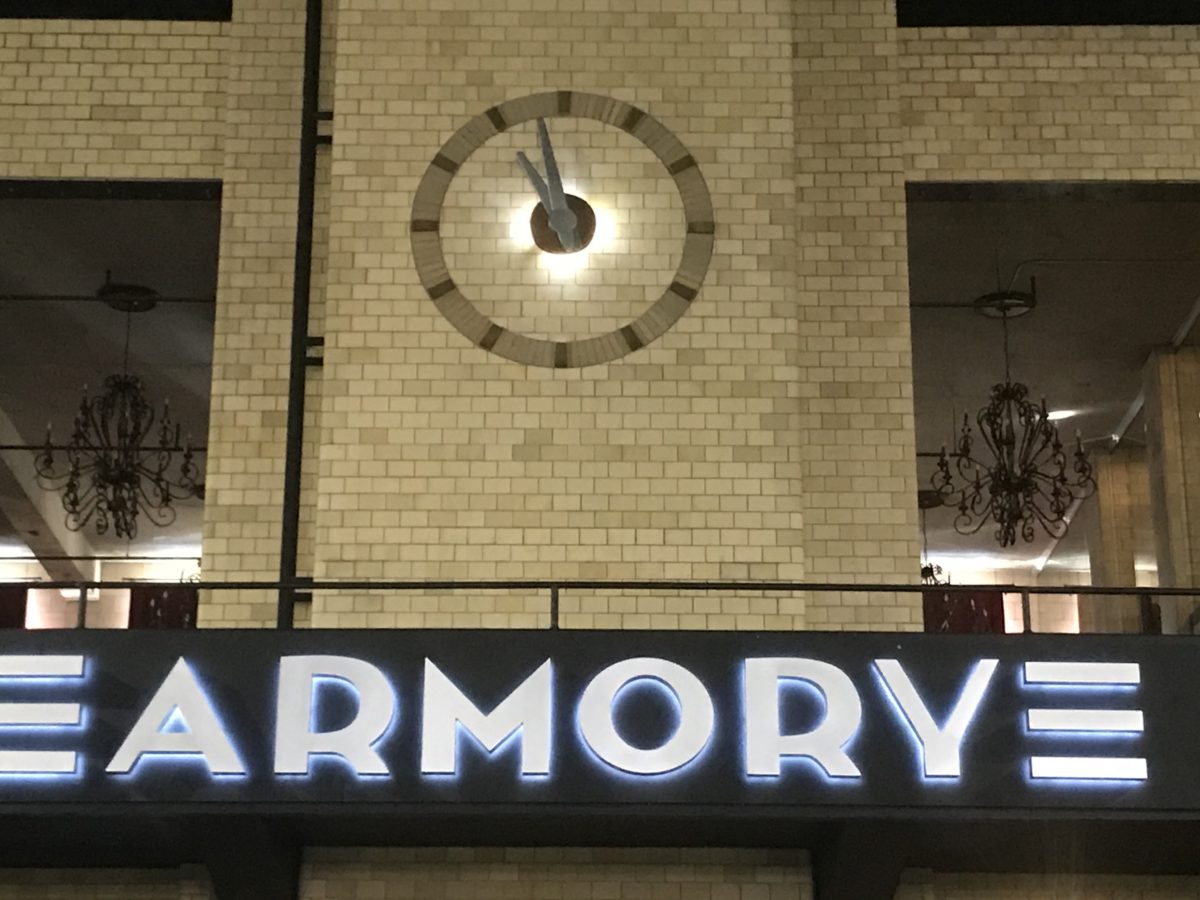 Well, indeed! We just installed a new clock up on the south wall of the hall. It doesn’t look that big from the floor, but it’s way up there. The minute hand is just under 4 feet long.

So now you won’t have to be watching the time on your phone while you do a romantic slow dance with your prince charming, since the phone doesn’t fit in your gown-I’m assuming your fairy godmother gave you a phone-actually, I’m assuming a lot of things in this post.

So, while I was writing this (it’s getting close to Halloween), I got to thinking about your transportation to the concert. You know, the pumpkin which turns into a limo? Yeah, I’ve updated that part of the story, too. Anyway, what would have happened if a thug overpowered your driver just before midnight, stole the limo, and was doing 60 mph down 5th Ave while being pursued by the police? At 12:00:01 a.m. would the thief suddenly find himself careening down the street INSIDE of a large pumpkin with a rat? (Yeah, I know that thought is pretty disgusting, but the rat was the coachman in the story.) Just imagine hitting a curb or a car at that speed. The big question is, if he survived, would the thief be charged with car theft and kidnapping or cited with a littering violation because of the smashed pumpkin? I guess it’s going to one of life’s mysteries that probably won’t get solved.

Well, back to the clock. It doesn’t strike the hours, but then again, it would be difficult to hear at a concert, anyway.

You could say I’ve been trying to keep the state government to operate in a timely fashion. We’ll see how successful I am when the legislature meets for the next session.

Anyway, I installed new clocks in the chambers, along with new hands that matched those of the House.  All of the clocks have been electrified since the capitol was built in 1904. The clock in the House Chamber was noted for it’s poor timekeeping, and the winding arbor (where you put the key to wind it) was 13 feet, and 9 inches from the floor.  Wouldn’t want to be the guy (probably) who lugged the ladder from the basement to the 2nd floor to wind the original clock, especially if he had vertigo or a hangover. Excitement can be fun, but not on a ladder.

Well, you should check out the Capitol!  It’s free to visit!  and it it truly impressive. After all,  you paid over $3,09,000,000 for the renovation-that is, if you live in Minnesota. That averages to $618 for each man, woman and child in the state.  But, hey, you can walk in and look around.  You can’t say that about every large building that the state has helped someone build recently,

Then again, what transpires  in this building does affect us. You can watch that happen, too!

Well, initially the saying applied to Rome rather then Edina Clock, but after they completed the roundabout construction, the sewer construction, and the tunnel construction within a half mile of here,  and with the Highway 100 reconstruction in Saint Louis Park is wrapping up, it certainly feels that way.

Just in time for closing 169 in Edina for up to a year.

Anyway, now you can get here without getting your GPS upset, and I won’t have to ask “Well, just where are you now?”

Well, it looks like some of our summer road construction is wrapping up, and it’s getting easier to get here.

But I have had several GPS using costumers who took the 70th exit, and felt like a mouse in a maze. They were ‘amazed’ (sorry….) at how difficult it was to get here.  That project should be done sometime in early November.

That was a classic case of ‘I told you so’.

If we have talked, and I’ve given you directions to my shop, you probably recall that I sent you south on Tracy and Valley View, and during this summer, through the roundabout construction. In some other cases, I’ve sent you on 70th.  However, starting August 31st, they will be replacing the railroad culvert so it can include the bike trail. That portion of 70th will be closed for about 2 months.  You can still get here through a detour, but unless you live around here, it won’t be easy.

I’ve also added a couple of FAQ’s on oiling and battery clocks.

If you would like some FAQs on clock repair, please let me know.

Well, the shorter it is, the faster it runs (think speed up, slow down).  And, to make it run twice as fast, it needs to be a fourth of it’s initial length.

I know that, and I can explain it, but not as well as Walter Lewin, professor of Physics Emeritus of MIT.  If you have an hour or so, and your interested in pendulum theory, you can go to You Tube and check out “For the Love of Physics (Walter Lewin’s Last Lecture).

Where else can you get information on pendulums from a 75 year old MIT physics professor while he is swinging from a rope?

Check it out.  You can also learn why the sky is blue.

Well, we installed the Fort Snelling tower clock, and the county invited the media while we were setting up the clock. My thumb made the Channel 5 news, but we got a three column picture in the Saint Paul Pioneer Press. However, it was on the crime page. We shared the page with a baby stabbing mother, ex-wife slasher and a police pedophile. Great company, huh? In this particular case, you could say we were all “doing time”.

There was also an old mechanical toaster that I repaired. It was the prototype that the company used when they started manufacturing toasters in the 20’s, and this toaster was one of the featured articles in the toaster collector’s magazine. Really, there is such a magazine. It was really hot news, huh?

Well, I hope you had an enjoyable holiday. As the year winds down, I thought I would share a picture of the smallest gear I ever cut. It goes on something we call a “platform balance”. It is like a watch escapement that would go on a large pocket watch.

Normally, I send gears out to get recut, if there is a lot of damage to the teeth, but I have a cutter that matched what was left of the broken gear. I made it a little thicker, well, because the original wasn’t quite strong enough. 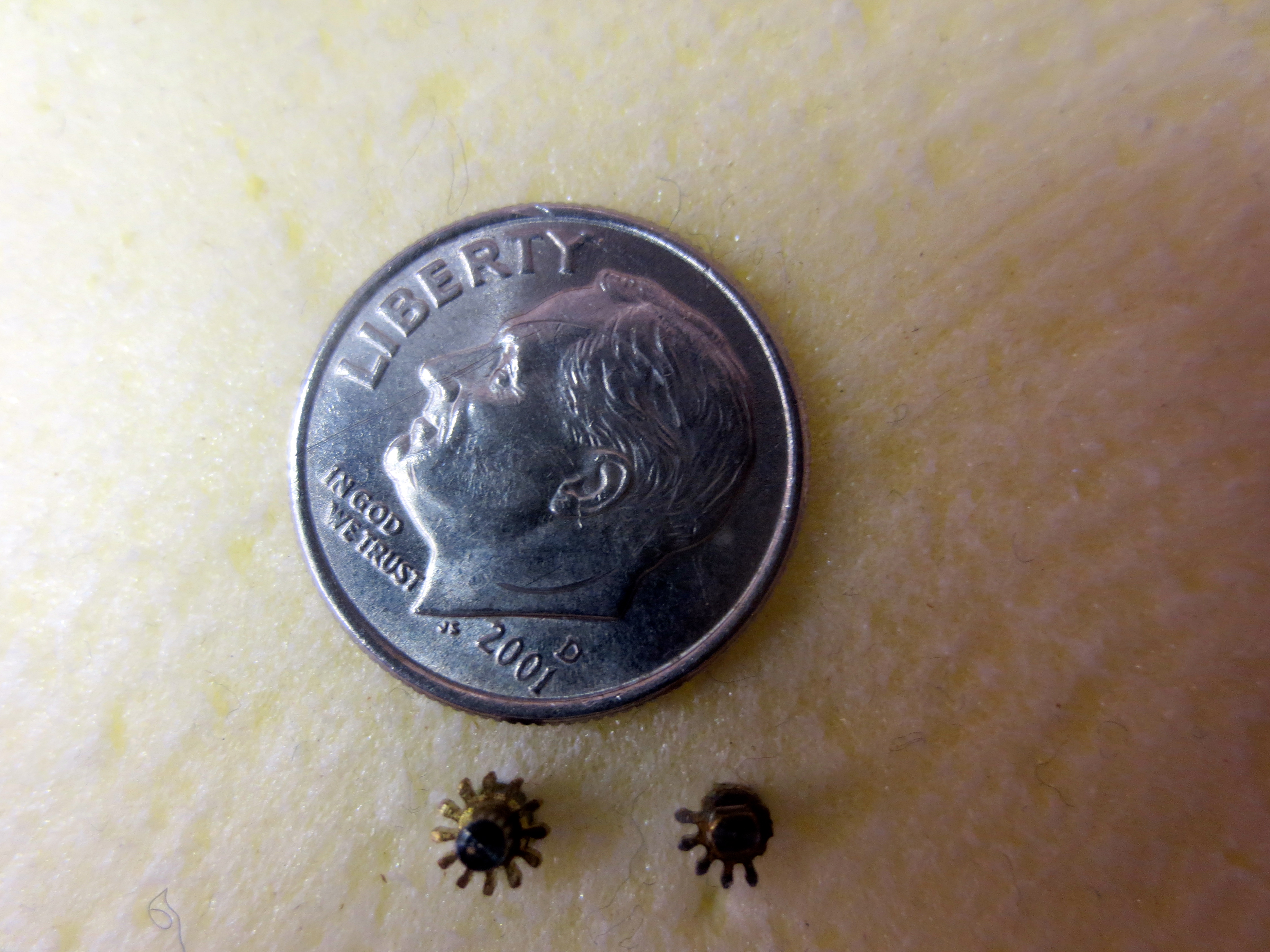 Ok, it’s an ambiguous statement, and unless you lived in South Dakota in the 60’s and later, AND HAD TV, you won’t understand the heading. But if your interested in buying some very nice clocks and watches, or other interesting horological items (ok-junk) you will have your chance. On October 12, 2013, the local chapter of the National Association of Watch and Clock Collectors will be having a watch and clock auction at the Bloomington MN National Guard Armory. If you would like to attend, please email me, and you could come as my guest!

Just let me know. There will be plenty of interesting items, and if you are interested in clocks or watches, this would be a great place to start.

Since last year, I’ve been working with the MN DNR and Hennepin county in writing the criteria and selecting the contractor to clean and repair the tower clock in the upper post of Fort Snelling (it’s where Custer got his orders which resulted in his “last stand”). It’s a big clock. The pendulum bob weighs 135 pounds by it’s self. Seth Thomas estimated the overall weight of the clock and weights “boxed, about 1,500. lbs.”

Phil Wright (The Tower Clock Company in Ohio) was awarded the contract. So this Thursday, Friday and Saturday, we removed the clock, piece by piece, down 3 flights of stairs. I realized, early Thursday morning, that a visit to the gym was going to be rather unnecessary.

While we were working in the building, someone called, and when he realized that I was at on old military post he said we must be “minute men”. That term goes back to the American Revolution, but I still thought it was pretty original).